For over two centuries the Anchor has had a wide variety of customers. In the early 1800s, military personnel were billeted here and in the surrounding streets, in anticipation of an invasion by Napoleon. At this time vessels from around the world arrived off Hastings, ferried passengers ashore and replenished their ship’s stores from Thomas Daniel, landlord from 1805 to 1840. Thomas Daniel also owned the building opposite (now Ye Olde Pump House) which he used as a store and kept an old water pump.

Who sells the best brandy, gin, hollands and rum—

He caters for tradesmen and sailors a lot,

And serves up for farmers, good dinners all hot;

With nimblest of feet and the strongest of nerves

It’s said that his patrons be very well served

From 1753 to 1833 the building next door was itself a pub called the Rose and Crown where local ship builders attended ‘settling dinners’, settled their accounts and  drank to new ships launched from the beach. In the latter year the Rose and Crown was replaced by an indoor market. It was later known as the Assembly Room and today as the Black Market. Over the next century the Assembly Room was used by a variety of groups and individuals. These included political parties during elections, a large branch of the Odd Fellows friendly society, temperance campaign groups, suffragettes, fishermen (5 am licence), auctioneers, the organised unemployed and later, the annual darts tournaments organised by the Hastings & St Leonards Observer. It was also the location of the Victoria Cinema from 1909 to 1910.

An important event which took place here was organised by local Chartists when Henry Vincent gave a lecture on political and constitutional history in 1852. Chartism was an important period in labour history between 1838–1848. The Chartists campaigned for political reform and took their name from the People’s Charter. Chartism began among skilled artisans, such as shoemakers, printers and tailors, as a petition movement, trying to mobilise a ‘moral force’ for reform. But it also attracted men who advocated strikes, general strikes and ‘physical force’. The only other Hastings pub known to accommodate Chartism was the Star, High Street (see the Roebuck). 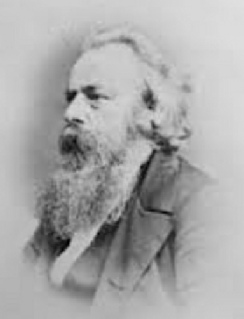 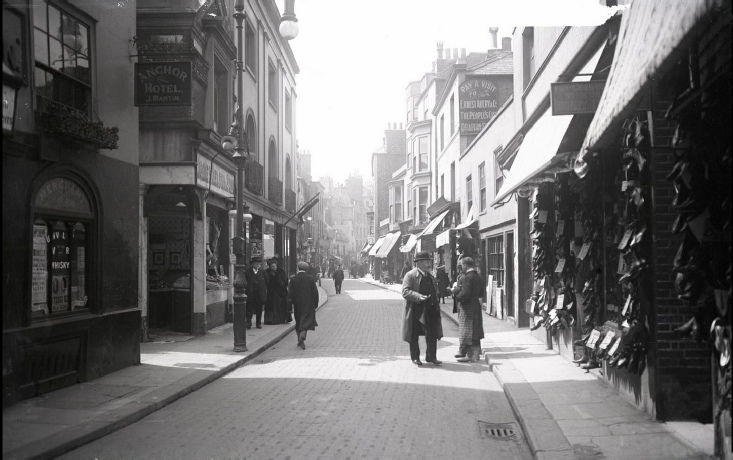 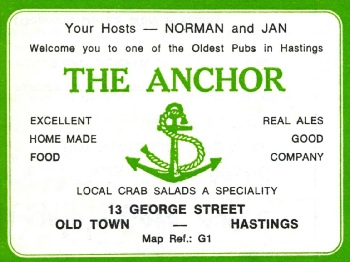 With the departure of Charles West, the Anchor slid downhill into a murky period of its history. Local prostitutes were allowed to ply their trade, thieves and pickpockets were among the customers and the pub was always in the news for drunkenness, gambling, riotous and immoral behaviour. Not surprisingly it was often threatened with closure, but has somehow managed to survive.

In 1876 one of the most serious riots in the history of the town broke out at the Anchor. A drunk refused to leave when asked, and assaulted the landlord. He was arrested and a riotous crowd assembled. Stones were thrown at the police in response to the man’s incitement of the crowd to rescue him. “This is a good chance to hustle the police”, he shouted and a large, violent crowd did just that. More stones were thrown, one seriously denting the constable’s helmet. In response, the constable had to call for assistance and  it finally took  four constables to overpower the man and take him away. A violent mob followed them to the station house and  remained outside for some time until they were cleared. The man was found guilty of assaulting the landlord, refusing to quit the pub and incitement to riot. He was sent to Lewes prison for a period of hard labour. The police station was one of the few civic buildings to remain in the Old Town where it was much needed in the late Victorian period.

In 1882 another riot broke out. This time at a large temperance meeting in the assembly Room, campaigning for the closure of pubs on Sundays. Temperance supporters were admitted early and took all the front seats, forcing their opponents to the back. This meant they had to shout to be heard. Eventually fighting broke out and a mass wave of people stormed the platform. ‘The uproar ended in a riot the like of which had never been seen in Hastings in living memory. Women fainted and chairs were thrown.’ Ironically, the key temperance speakers on the platform had to escape through a connecting door into the Anchor and then out onto George Street.

For an account of the customers a century later, see the Lord Nelson and the comments on the ‘Nellie-Anchor’ crowd.

Another Anchor Inn dating back to at least 1680, once stood outside the Old Town wall, near the fish market. The current Anchor Inn, George Street, dates back to 1798, when the licensee was Anne Thwaites. This was an era when the population was largely illiterate and when pubs were recognised by visual symbols and signs, instead of written names. Hence the small anchor embedded in the wall above the door. The Anchor was a popular sign for pubs near the sea.

From 1840 to the late 1860s the landlord was Charles West who kept a respected and well-run public house and leased the Assembly Room. In the 1850s the centre of Hastings moved from the Old Town to the Priory Valley and Charles West went with the flow and moved into Robertson Street in 1868, where he took over the premises now known as the Bat and Bee, but then known as West’s Cellars. One of his last acts before leaving was to raise money for new bells for St Clement’s Church. The Anchor was then sold for £2,500 and the Pump House opposite for the ‘knock down price’ of £500. 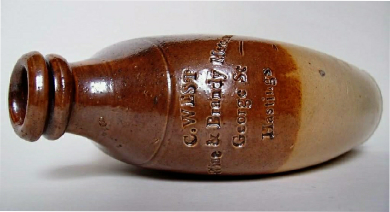 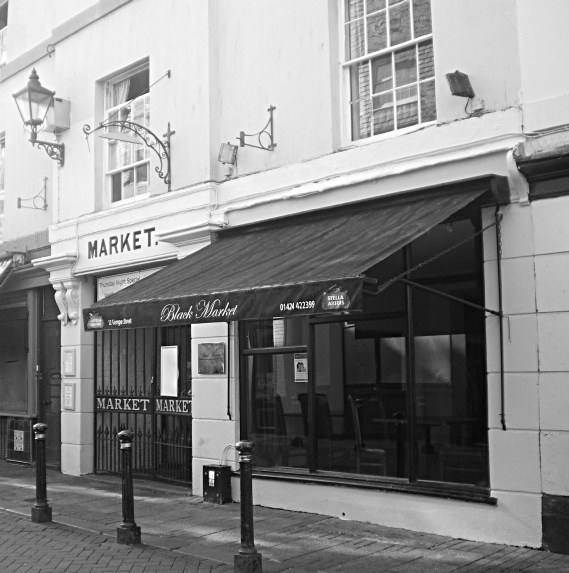 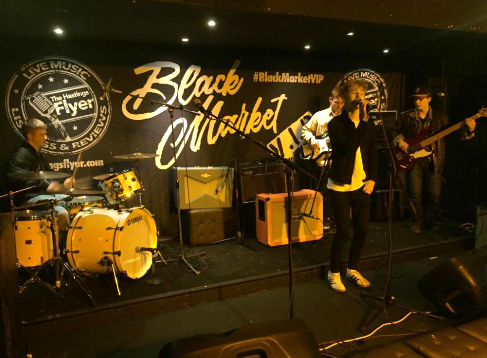 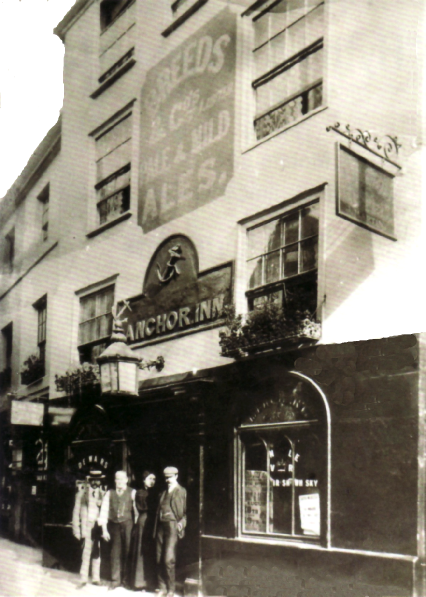 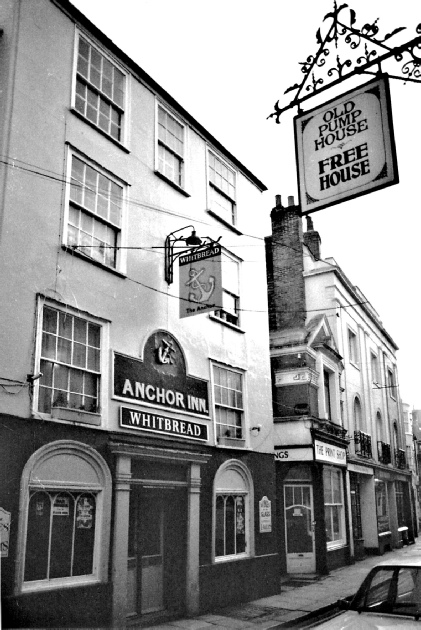 Another Anchor Inn dating back to at least 1680, once stood outside the Old Town wall, near the fish market. The current Anchor Inn, George Street, dates back to 1798, when the licensee was Anne Thwaites.1 This was an era when the population was largely illiterate and when pubs were recognised by visual symbols and signs, instead of written names. Hence the small anchor embedded in the wall above the door. The Anchor was a popular sign for pubs near the sea. 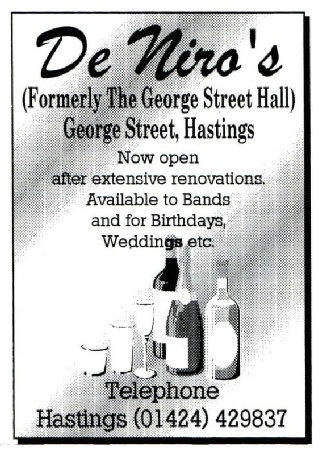 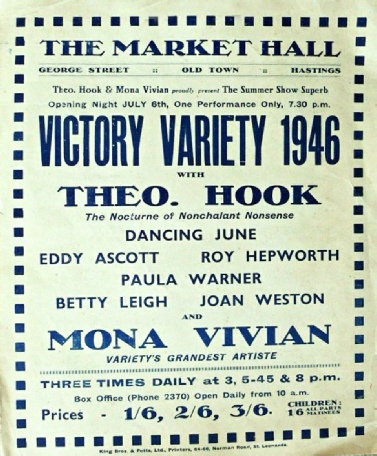 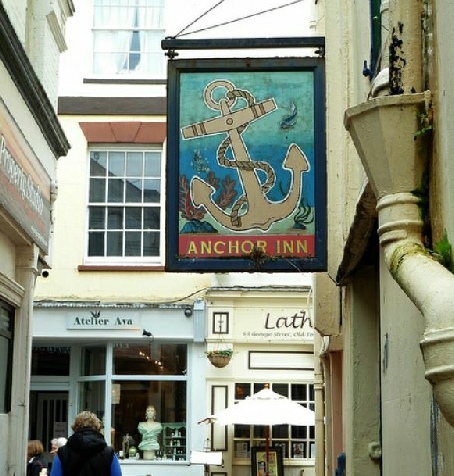 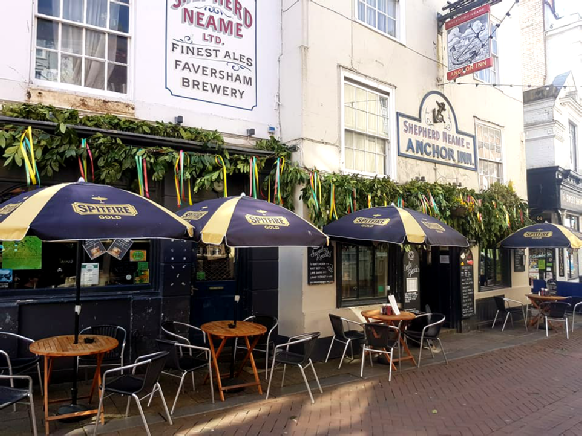 Anchor Inn 2018 decorated for May Day 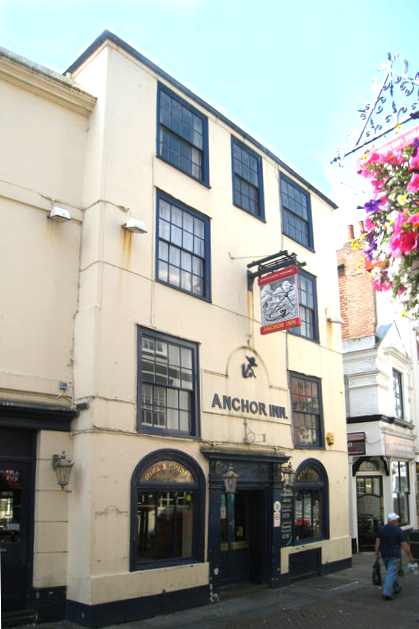 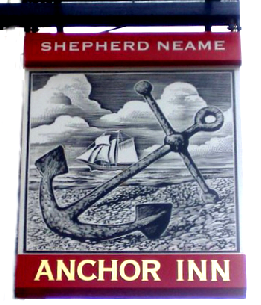