The Cricketers was a pub from 1864 until 2007. Its most famous customer was Robert Tressell, author of The Ragged Trousered Philanthropists a novel set in Hastings incorporating local Labour history and the social conditions of a group of painters and decorators. Tressell drank here in the early years of the twentieth century, attended socialist meetings and observed customers who became the prototypes of characters in his book.

The description which follows is widely recognized as one of the best accounts of working class pub life in the Edwardian era. It is paraphrased from a chapter in Tressell’s book.

Viewed from outside the Cricketers was a pretentious looking building with plate glass windows and a profusion of gilding. The pilasters were painted in imitation of different marbles and the doors grained to represent costly woods. There were panels containing painted advertisements for wines, spirits and beer, written in gold, and ornamented in gaudy colors. On the lintel over the principle entrance an inscription in small white letters read:

and malt liquors by retail to be consumed

either on or off the premises.’

The public bar was separated from the other bars by varnished, wooden partitions. Benches were screwed to the floor across these partitions providing seating. The floor was covered in sawdust and spittoons were located at intervals around the room. The fittings behind the bar were of polished mahogany, with silvered plate glass at the back of the shelves. On these shelves were rows of bottles and cut glass decanters containing  gin, whisky, brandy, wine and liquors of different kinds. Customers who found themselves broke often drank on credit or ‘on tick’. The landlord kept a record of how much he was owed in an account book behind the bar. This custom was known as ‘running up a score’ and lasted until the First World War when it was abolished by the Lloyd George government.

The public bar was the location of a ‘large automatic instrument’ a Polyphon(e) or antique music player with a cylinder, a forerunner of the jukebox which stood close to the counter. 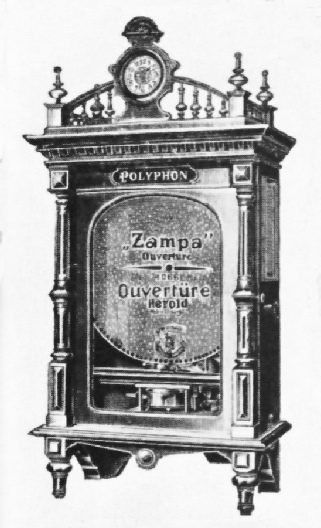 The polyphon, an early jukebox

‘The landlord was a well fed and prosperous looking individual in a fancy waistcoat, gold watch chain and a diamond ring. The landlady was a large woman with a highly coloured countenance ... a large bust encased in a black dress and several gold rings on her fat, white hands.’

One of the customers, the ‘Besotted Wretch’ practically lived in the pub. He arrived every morning and sometimes earned a pint of beer assisting the barman to sweep up the sawdust or clean the windows. He usually remained until closing time and was a very good customer. Not only did he spend whatever money he could get hold of but he was the cause of others spending money, for he was acquainted with most of the other regulars, who, knowing his impecunious condition, often stood him a drink ‘for the good of the house’.

Another regular was a shabby, semi-drunken man in a bowler hat with a ‘very thin, pale face and a large high bridged nose, bearing a striking resemblance to the first Duke of Wellington’.

“Wotcher”, said the landlord affably, greeting the customers, “Ow goes it?” “All reet me ole dear”, was the usual reply. “Well wot’s it to be.” “Ere’s the skin orf yer nose”, was the usual toast. The landlord would put a penny in the polyphone and it would start to play. The semi-drunk would rise to his feet unsteadily and begin shuffling and singing:

“They may build their ships, my lads,

And try to play the game,

But they can’t build the boys of

“Ere! Stop that, will yer?” cried the Old Dear, fiercely. “I told you once before that I don’t allow that sort of thing in my 'ouse!” “I didn’t mean no  'arm”, he said unsteadily, appealing to the company. “I don’t want no chin from you!” said the Old Dear with a ferocious scowl. “If you want to make that row you can go somewheres else, and the sooner you goes the better. You’ve been 'ere long enough.”

Tressell observed the pub games and the Besotted Wretch throwing rubber rings at the ring board. The customers laughed when he missed and applauded ‘when he threw a good ring’.

On one occasion he watched the two regulars play each other. “You can’t play for nuts”, said the Besotted Wretch. “Can’t I? I can play you, anyway.” “Right you are! I’ll play you for a round!” cried the Semi-drunk. “Come on then. What’s it to be? Fifty up?” “Anything you like! Fifty or a 'undred or a bloody million!”

‘Holding the six rings in his left hand, the man stood in the middle of the floor at a distance of about three yards. Taking one of the rings between the forefinger and thumb of his right hand and closing his left eye, he carefully “sighted” the centre hook, then he slowly extended his arm to its full length then, bending his elbow, he brought his hand back again until it nearly touched his chin, and slowly extended his arm again. He repeated these movements several times, whilst the others watched with bated breath. Getting it right at last he suddenly shot the ring at the board, but instead of hooking on No 13, it went over the partition into the private bar’ to the huge delight of the watching customers. 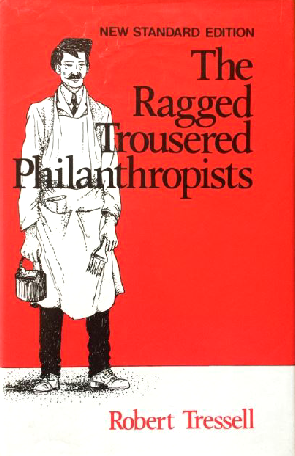 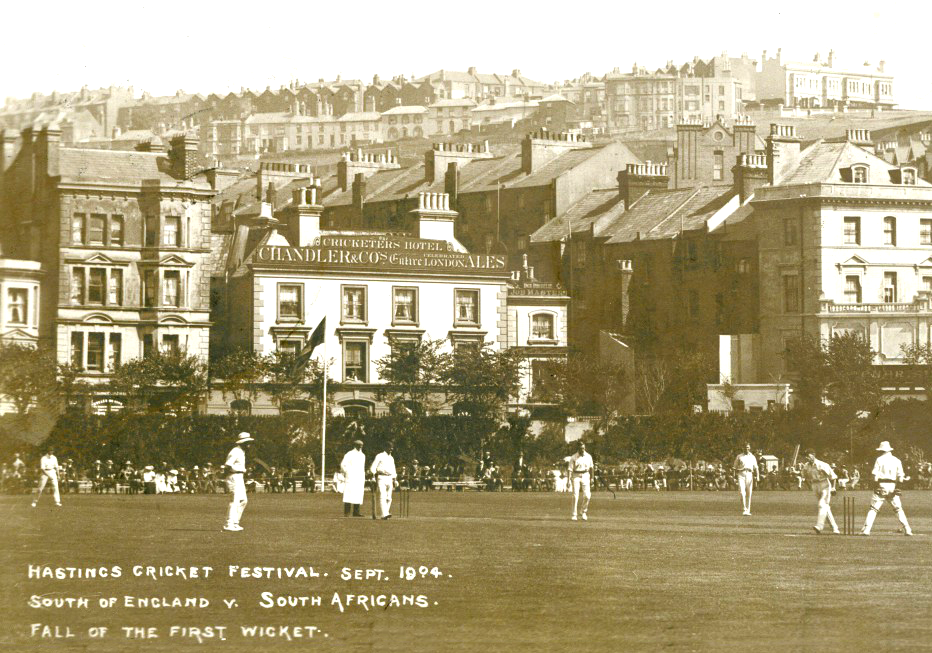 Hastings cricket festival 1904 with the Cricketers pub in the background

The other popular game was shove-penny or ‘shove’ played with old coins on a board. In turn each player ‘shoved’ five pennies along a board. To prepare each coin the player positioned it at the front of the board with the coin just sticking over the front edge. Any part of the hand was then used to knock the coin up the board.

Tressell’s book refers to the game as shove-ha’penny but in Hastings and Eastbourne the game was always played with pennies and called ‘shove-penny or simply ‘shove’. This error is presumably the result of one of the many editing’s of the book by someone not from Hastings!

Besides the Saloon and the Public Bar there were also three smaller bars. The Jug and Bottle for taking away beer and two small private bars appreciated by customers who liked to indulge in a ‘drop of gin’ on the quiet. 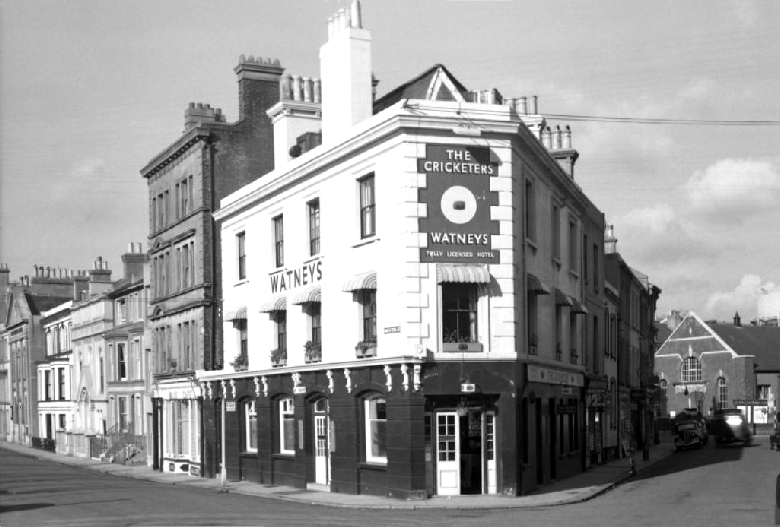 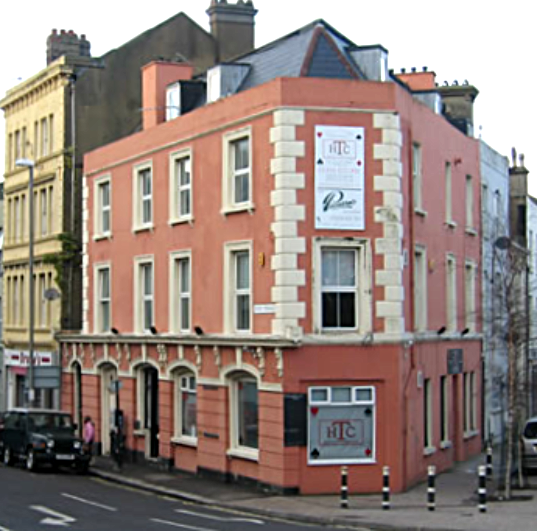 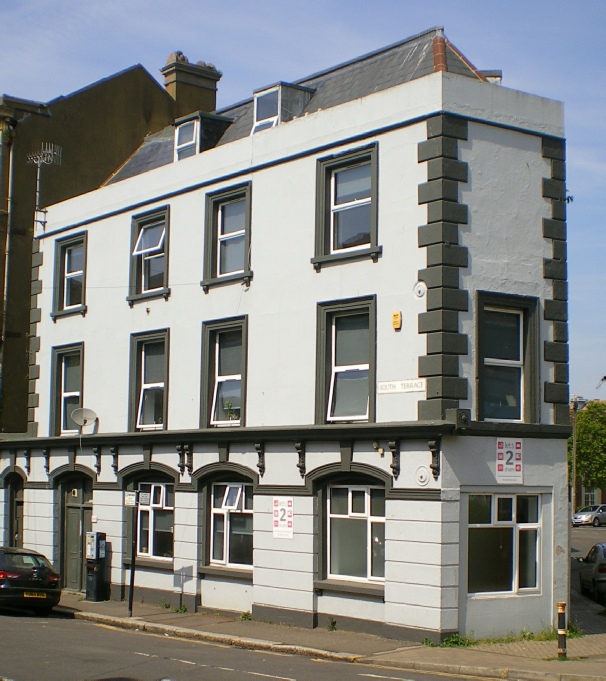 Site of the Cricketers 2017

Nearby was a ring board, about 15 inches [38cm] wide, where players threw rubber rings onto numbered hooks. Above a neatly printed framed notice said:

Gentlemen using this house are respectfully asked to refrain 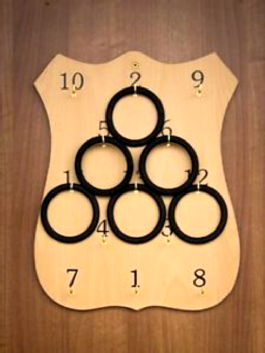 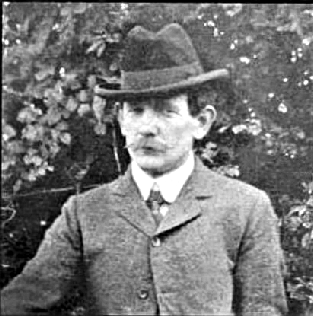 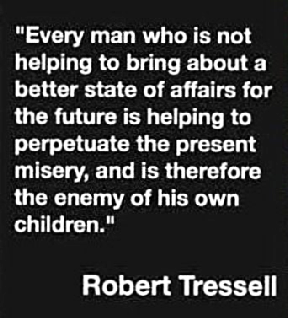