This Victorian pub on the Queen’s Road was first fully licensed in 1853. Employees of the slaughterhouse across the road provided a lot of custom, as did the numerous horse dealers who, on coming into town to trade, tethered their animals nearby whilst completing transactions over a pint in the saloon bar. The butchers of Hastings had some sort of informal organization supporting their trade in the town during these years and the Fountain, because of its location near the slaughterhouses and abattoirs, was known, for a time, as the ‘butchers pub’. In the 1870s butchers not only drank here but also used the pub for more formal occasions. In 1879, for example, 30 butchers attended a wedding party of one of their members at the Fountain. The party turned into a riotous celebration and the licensee was fined 10s [50p], while a waiter, Gabriel Eaton, was also cautioned. Following this, in the 1880s or early 1890s, there was an attempt to change the name of the Fountain to the Jolly Butchers. However, this was refused by the brewery. 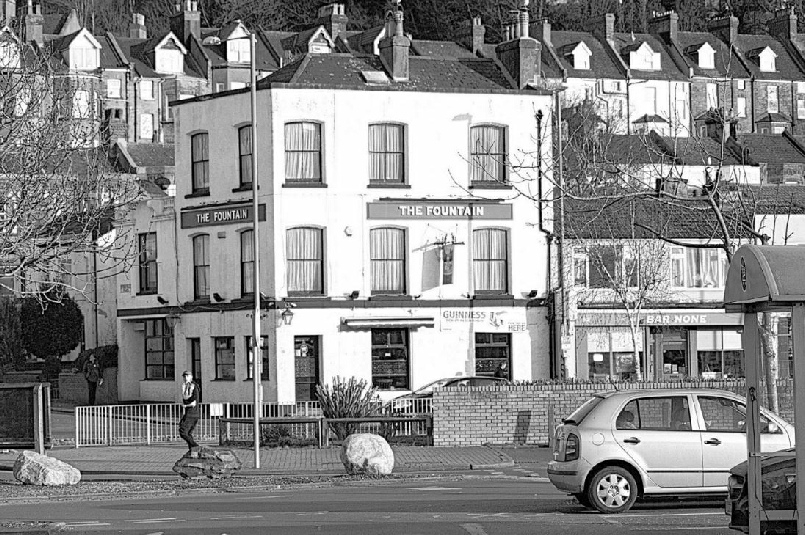 In the 1930s the Hastings and St Leonards Observer ‘put darts on the map in Hastings’ when it organised the first Hastings Annual Darts Tournaments. The Fountain team came to brief fame when it reached the semi-final in which it was only narrowly beaten by the Hastings British Legion Club. The match was held at the Cambridge (more recently the Tubman, now closed) and ‘the room was packed with eager supporters of both teams, who watched the flight of the darts with an intensity not bettered at a test match’. The British Legion team admitted that: ‘There were only two teams we feared, the Fountain and the Cambridge’. But little did they fear the immediate future. Three years later the town was evacuated during the Battle of Britain and the Fountain closed down from 1940 until 1943. 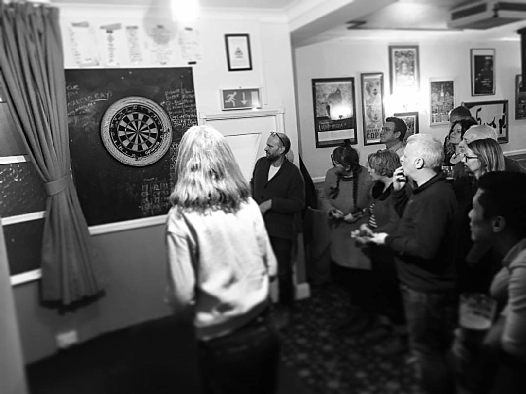 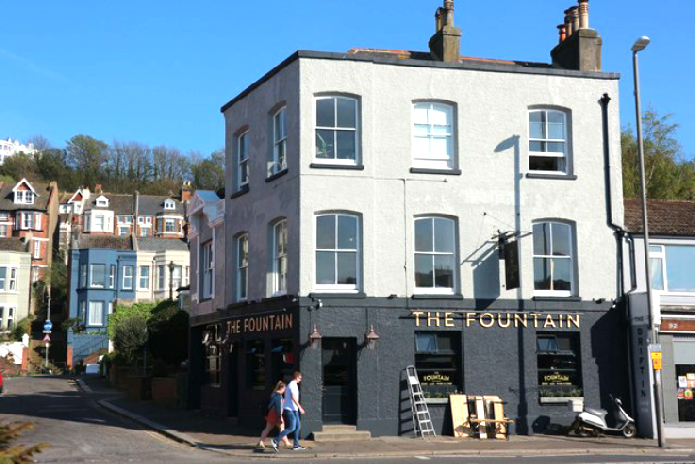 The pub quickly began to carve out a market for itself lending support to Jack in the Green, May Day and Pirate Day, among others. As a gay bar it has also become a successful centre for Hastings Pride. ‘We welcome all from the LGBTQ+ communities’, said the landlord at the 2019 parade. ‘Friends, families, allies and heroes of all ages are invited to join us for a day of celebration. A huge day of music, cabaret, entertainment, arts, food, drink and various stalls to cater for all our heroes, from the likes of: Sigue Sigue Sputnik, Booty Luv, Nikki Bockerglory, Hannah Scott, Mutya Buena, Helen Scott, Son of a Tutu, Alibi, Helen Sharpe and the soulshine band, Mzz Kimberley, Vinegar Strokes, Holestar, Atomic Twitten, The Happy Maureens, Jen Ives PLUS many, many more.’ 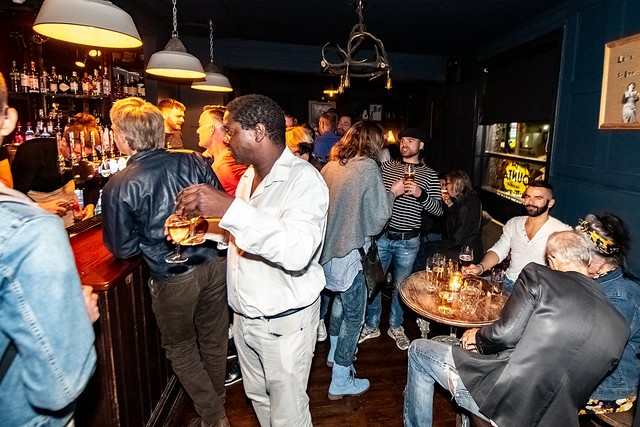 Reopening of the Fountain 2019 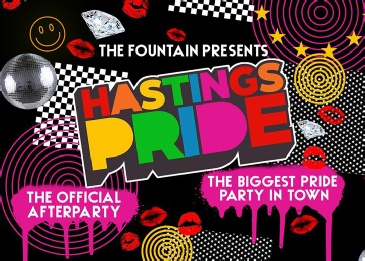 But there is some new competition. Apart from the Drift Inn Bar next door to the Fountain, a second micro pub and ‘Community Ale House’, converted from an old shop, opened at 80 Queen’s Road in 2017. The ‘Community Ale House’ is known as the Twelve Hundred Postcards, a reference to an illegal activity which took place on the site more than 100 years ago. The name relates to the site’s former use as a sweet shop when the owner secretly sold French postcards ‘under the counter’. This activity led to the premises being raided and the owner found guilty of corrupting the morals of the local community. He was sentenced to three months hard labour and the 1200 postcards that sealed his fate were destroyed.

There has never been a better time to be a beer enthusiast in the UK. Sussex alone has an estimated 60-plus breweries, with the likes of Burning Sky and Franklins producing world-class brews. The Twelve Hundred Postcards is a traditional micro pub offering real ale served directly from the barrel. ‘There will also be wines from Sussex and small batched gins. The selection of ales will constantly rotate.’ The landlord says the aim is to offer beers that are not widely available, as well as a range of bottled and canned craft beers.

In 2019 the Fountain closed again but this time it bravely adopted a different image before reopening. Ignoring the recent experience of its sister pub the Imperial along the road, the Fountain became a gay bar known as the ‘Fountain on Queens’. The name distinguishes it from the ‘Marina Fountain’ in St Leonards, another Hastings pub recently closed and reopened. 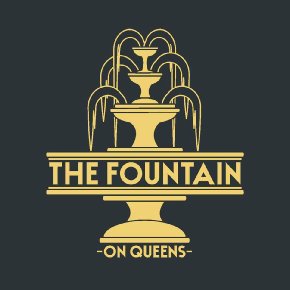 In the 1950s the Fountain sign was included in Whitbread’s miniature inn sign series and customers got a model sign with their pint. This sign was replaced by the Shepherd Neame brewery when they purchased the freehold in 1993 and has itself been replaced by the current sign.

As a pub sign the ‘Fountain’ is many centuries old. In previous times it was a favourite inn sign, in particular during the Reformation of the mid-16th century. This was on account of its connection with the martyrdom of St Paul the Apostle who was beheaded by the Romans in AD 68. It is claimed in religious mythology that when his decapitated head fell to the ground it bounced three times and that a fountain appeared at each of the points where the sacred head touched the ground. Hence there is a church in Rome called the San Paulo dela Tre Fontaine, (Saint Paul and The Three Fountains) where altars were built over each of the three fountains. This explains why the pub sign shows a fountain with water falling from three levels. 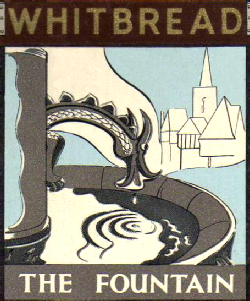 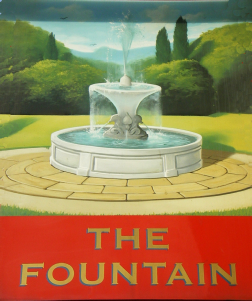 By the 17th century the sign of the three fountains was also in use by the Worshipful Company of Plumbers, a Livery Company of the City of London. Among other things the Plumbers Company was responsible for the maintenance of public fountains. Subsequently, like the pub sign, a fountain was and is, shown on their Coat of Arms. 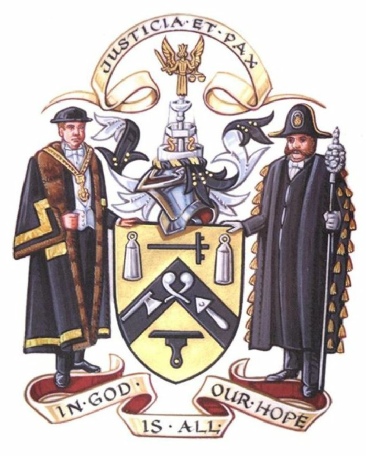 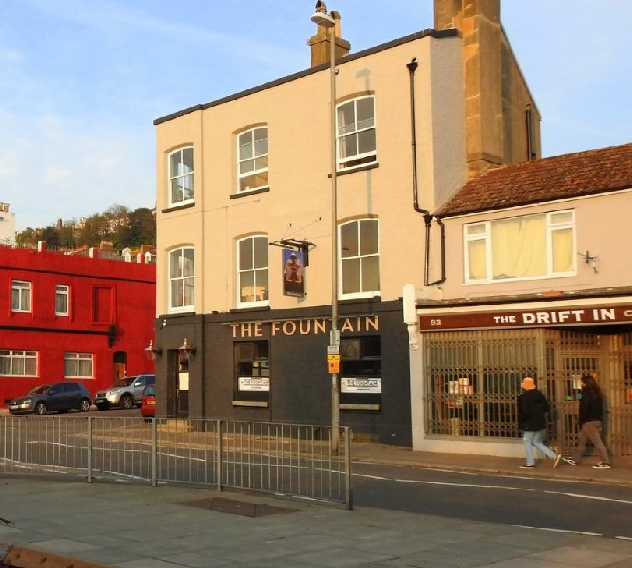 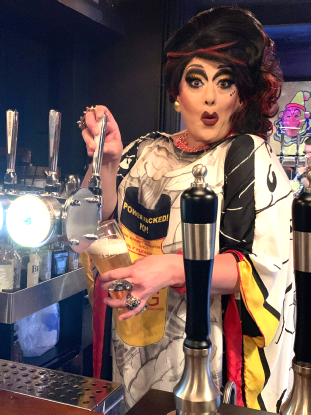 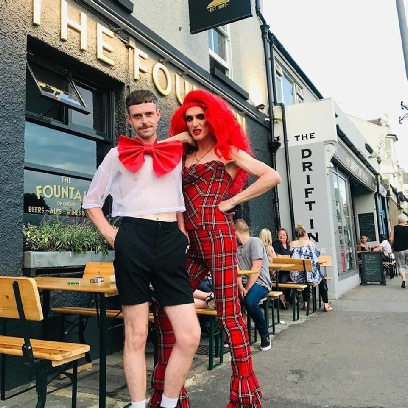 The Drift Inn, next door to the Fountain