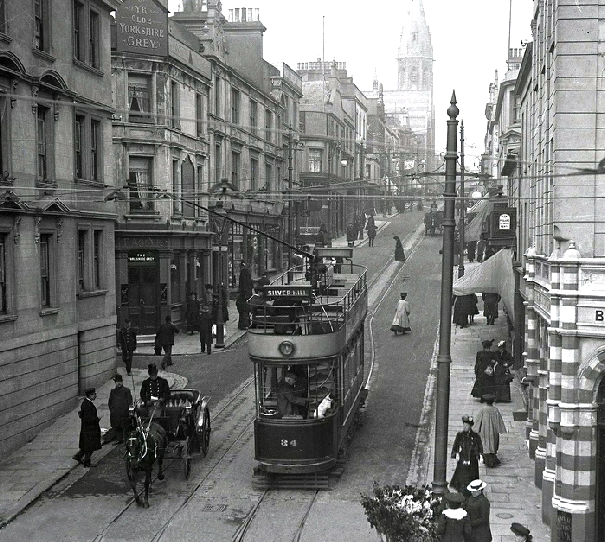 The Admiral Benbow first opened its doors in 1833. It was the third licensed premises  to be built in the new town of St Leonards-on-Sea then being erected by James Burton. It was first known as the Saxon Shades, a plebeian taproom at the rear of the Saxon Hotel.  The Saxon Shades existed for half a century serving the drivers and coachmen of the six-horse coaches which stopped there and the ostlers and stablemen who serviced them. The name ‘shades’ was a term used in the south-east for a tap room located behind a hotel, indicating that the premises were used by ‘ladies of the night’. 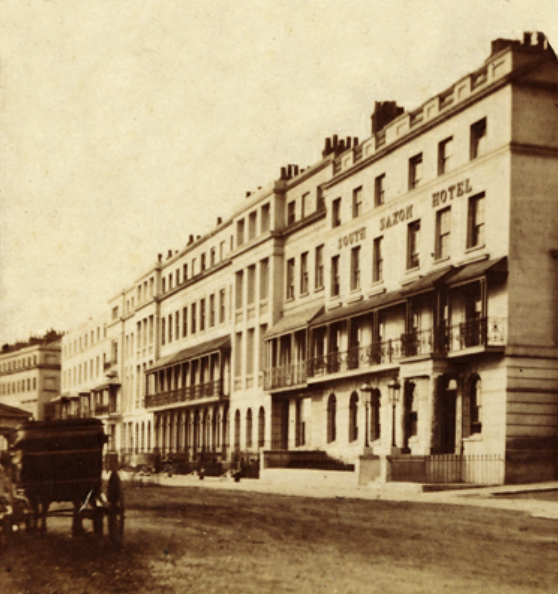 From 1876 to 1884 the Shades also acted as the local post office. Landlord Nathaniel Vaughan acted as local postmaster receiving and dispatching the St Leonards post on the London mail coaches. A sign above the main door said: ‘N.J. Vaughan, Post Master and Job Master.’

In 1884 the Saxon Shades changed its name to the Yorkshire Grey and in 1898 the landlord was summonsed for allowing gambling on the premises, a report that hit the national headlines. The landlord, Lewis Hobbs, organised a Derby sweepstake on the run up to Derby Day every year. This was run on the calculation that selling 1,000 tickets at 2s 6d [12½p], would generate a total of £125. Ten per cent was deducted for expenses and printing, leaving £112.10s [£112.50] for prizes. Tickets were sold openly over the bar. However, the police employed a man called Mawle a former barman, to observe ticket sales and to note whether or not the gambling law was being broken. On Mawle’s evidence the police raided the pub and the landlord was charged.

A jury convicted him at Lewes Assizes but he appealed. The case went to the Queen’s Bench where finally, five judges decided that the Yorkshire Grey sweepstake was a lottery that the landlord managed ‘for the purpose of adding to the popularity of his house’. He received no profit and took no tickets. The prizewinners were decided, not on the outcome of the horse race itself, but on the drawing of the tickets. The conviction was quashed and Lewis Hobbs was exonerated. This case helped clarify the definition of gambling in pubs all over the country.

To the Editor of the Observer

SIR, — Now that the Saxon Hotel has been closed, the question has been more than once put to me, “When and by whom was the building erected?”

The answer is this: — Nos. 1 to 12, Adelaide-place (now Grand-parade), were built by Messrs. Towner, Jenner, and other persons, from the plans and designs of the late Walter Inskipp, in 1831, and the adjoining house was erected for the late William Mantel Eldridge by the builder Smith. It was, I believe, completed in 1832.

“Give your verdict,” said an eminent Vice-Chancellor, “but assign no reason.” This was just what the Magistrates did when they refused Mr. Mantel Eldridge a licence for the Saxon Hotel: for whatever might have been their reasons for the refusal, they assigned none. Albeit, in their case, the Vice-Chancellor’s advice was acted upon to their detriment. The “King” – as those who delighted in pseudonyms were wont to style Mr. Eldridge – was not to be denied his suit by any less regal body: and he therefore summoned the Magistrates to Lewes to show cause for their refusal. Their plans were deemed insufficient, and Eldridge, the “Saxon King,” came off the conqueror.

In a very short time the Saxon Hotel became a licensed house, and during 72 years of its existence has been successively managed by Mr. Eldridge, Mr. Hutchings and other persons. But, like the old Swan Hotel, of which the same Mr. Eldridge at one time became proprietor, it has ended its career as an hotel, and will be replaced by something more modern, and let us hope, more generally successful.

It is probable that in Eldridge’s case the then Magistrates judged the licensed houses to be more than sufficient for the needs of the public, and thus the former declined to accede to Eldridge’s request. There were at that time the Harold Hotel, the Conqueror Hotel, the St. Leonards Hotel, each with its so-called tap, the Horse and Groom and the Warrior’s Gate Inns, all within a stone’s-throw distance.

But the defeat of the Magistrates at the Lewes Court made them very chary as to future refusals: hence, within a comparatively short period licences were readily granted for the Anchor, the Coach and Horses, the Fountain, the Black Horse, the Sussex Tap, the Old England Tavern, the Norman Hotel, the White Hart, the British Queen, and the St. Leonards Arms, the last-named in connection with the St. Leonards  Brewery, of which Mr. Eldridge was proprietor. 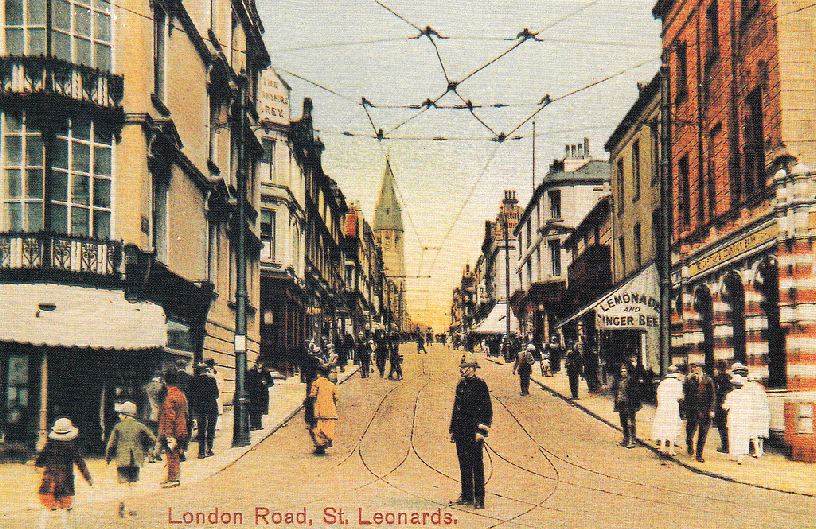 Early postcard with the Yorkshire Grey 2nd building on the left

The  music  stopped  in 1995 when the pub closed temporarily after the landlady ran off  with the takings  and  the  jukebox. Soon after it  was  renamed  the Admiral Benbow after a romantic character from Britain‘s murky imperial past.  John Benbow was a 17th century British naval officer who fought against the combined French and Dutch forces in the ‘Nine Years War’ (1688–1697) and most notably in the ‘Battle of Beachy Head’ in 1690.

‘In one unconventional attack he sailed a 300 ton merchant ship filled with 20,000 tons of gunpowder, exploding mortars, iron bars, broken glass, bullets, chain and nails into St Malo, a civilian harbour, and detonated it. While St Malo rocked from the concussion of the explosion which was heard a hundred miles away, Benbow took a group of men ashore and burnt down the convent.’ Sam Willis: History Today.

After his death in 1702 his name entered  popular culture. He is commemorated with a statue in Shrewsbury, the town of his birth. More recently at least two battle ships have been named after him and he is also the subject of a well known folk song.

The name ‘Admiral Benbow’ became a popular pub name in the later years of the 19th century after the publication in 1883, of the adventure novel Treasure Island by Robert Louis Stevenson. Stevenson chose the name Admiral Benbow for the pub in the opening chapter of his book which became one of the most frequently dramatized of all novels.

All of this inspired a number of public houses to adopt the name,  including this one in St Leonards in 1995 when the name changed from the Yorkshire Grey. A yorkshire grey is a particularly large and strong horse used at one time by brewers to pull drays heavily loaded with beer.

Around 80 years later the large upstairs room had become a popular ‘pub rock’ venue known as Blades. It was one of a few live music venues in Hastings at the time and was organised by Phil Little, drummer with local group The Pullbacks. Award-winning pianist and jazz singer Liane Carroll played here with the Trevor Francis Quartet, as did the Roger Carey Band and many others.

Trefor Holloway recalls: “The pub I remember with affection is the Yorkshire Grey. It’s closed now but in the 80s I worked sometimes in pub security. I worked as a bouncer on the door there. The Yorkshire ‘Gay’ as it was dubbed was the most lively, popular and successful pub in the town.” 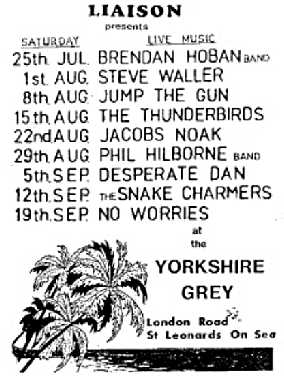 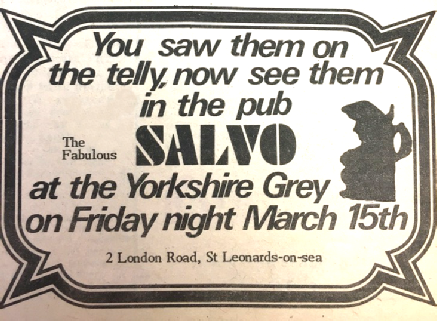 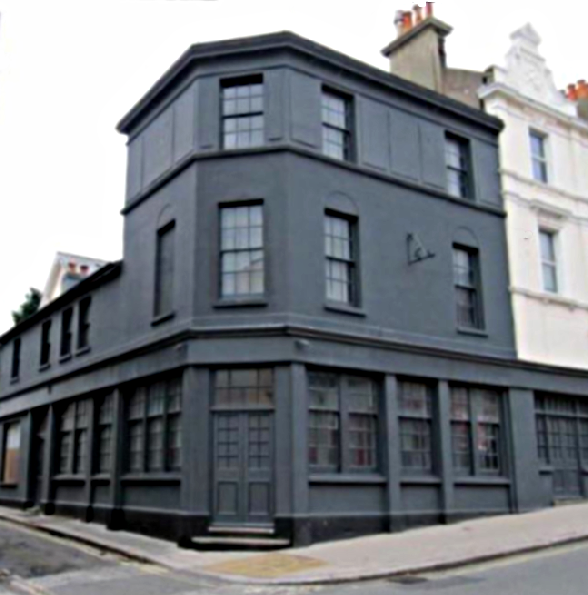 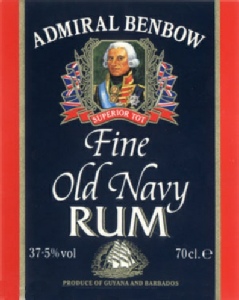 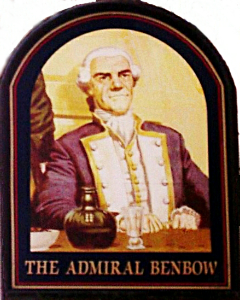 The Admiral Benbow finally closed in 2008 and the building is now in use as a lighting studio. 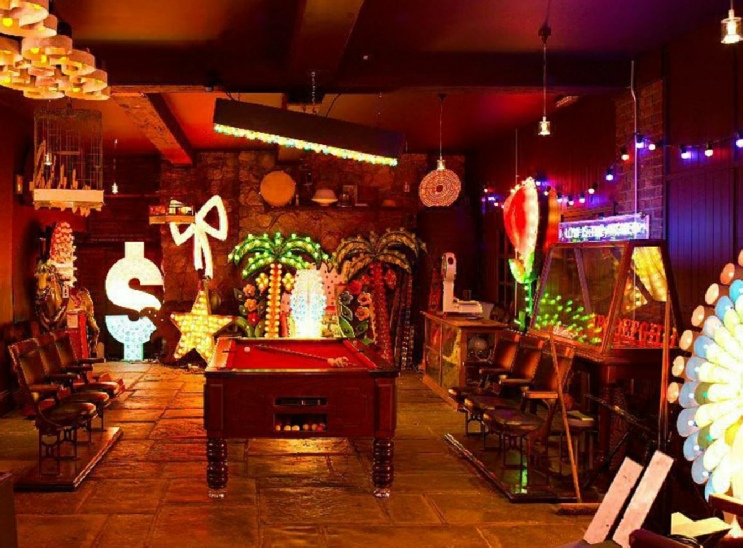