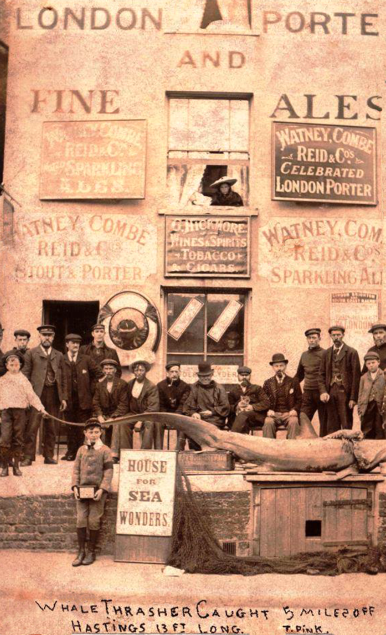 In Larwood and Hotten’s History of Signboards, the Dolphin has an illustrious record. The pub sign shows a dolphin following a fishing boat, an emblem derived from many historic tales from around the world. The main story is ‘that when violent winds disturb the sea and the anchor is cast by seamen, the dolphin winds herself round it, out of a particular love for mankind, and directs the anchor so that it may safely take hold of the ground; for dolphins have a peculiar characteristic; that they can foretell storms.’

Another source claims that in ancient times the dolphin was a guide to souls in the underworld and a saviour of the shipwrecked. The Greek goddess Aphrodite, has commonly been associated with the dolphin as a bringer of good fortune, as the provider of a safe passage in a rough sea and as a carer of souls in the afterlife. Dolphins were very common in Greek culture and were found on Greek coins, pottery, engravings and frescos.

The Dolphin story continues thousands of years later during  the reign of the first Roman Emperor Augustus when a dolphin living near Naples fell in love with a poor schoolboy. Each day the boy would call to his friend and the dolphin would carry him across the bay to school. There came a day when the boy was mortally stricken with disease and could come no more. The dolphin returned daily to their meeting place like a mourner at the graveside, until he too weakened, ceased to frolic around the bay and finally died. From his death sprang more than sadness, for it was caused by marvellous affection which is the more memorable sentiment.

Fishermen describe the exuberant dolphin all over the world. They tell how dolphins play constantly around the bow of their boat, sometimes for hours on end. They rise very close alongside to breathe, making a half-snorting sigh, only to dive and tumble once again. In the great expanse of water around the globe, dolphins have located humans in trouble and saved them from drowning.

There have been at least 12 ‘fishing pubs’ in the locality of the Stade. These are or were the Cutter, Jolly Fisherman, London Trader, Lord Nelson, Pelican, Prince Albert, Queen Adelaide, Queen’s Head, Rising Sun, Royal Standard, Star in the East and the Hastings Arms. These pubs, supplemented by any number of beer houses, together formed the backbone of the fishing community. The Star in the East, the Prince Albert and the Dolphin all stood within a few metres of each other on Rock A Nore. Many of these pubs held beach leases and net huts for the use of their customers, including the Dolphin.

George Hickmore, landlord between 1902–1907, made use of anything unusual in the daily catch by displaying it in front of the pub. During his five years the Dolphin was dubbed the ‘House of Sea Wonders’. Whole families turned up to support the displays and have their pictures taken. 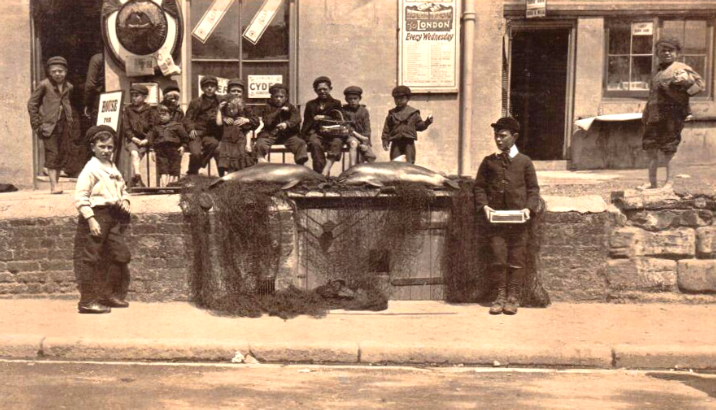 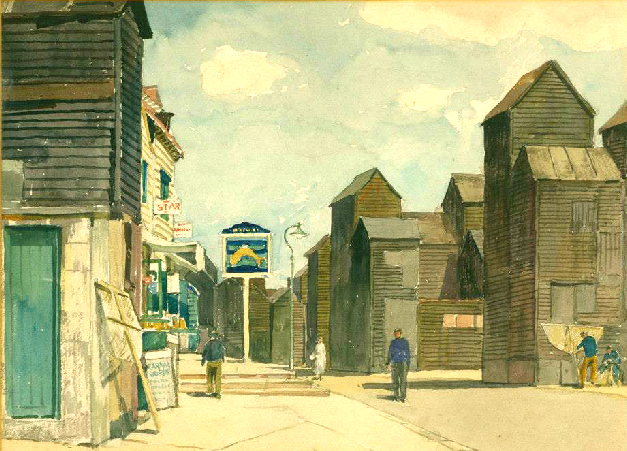 Dolphin and the Star on the left and net huts on the right. Watercolour by Leslie Badham 1935

On the outbreak of the Second World War, the Dolphin Inn closed from 1940–1946 when the pub was requisitioned by the army. In the interim the licence was held by Harry King of Watney’s Brewery and Rock A Nore was occupied by the military. The Stade was forbidden territory to the public and tank traps were seen on the beaches. Only fishermen had access through a gate on Rock A Nore operated by the military.

The Dolphin was originally owned by Burfields Brewery of Courthouse Street, Hastings. In 1908 it was acquired by  Watneys who, in 1930,  rebuilt the pub that exists today. 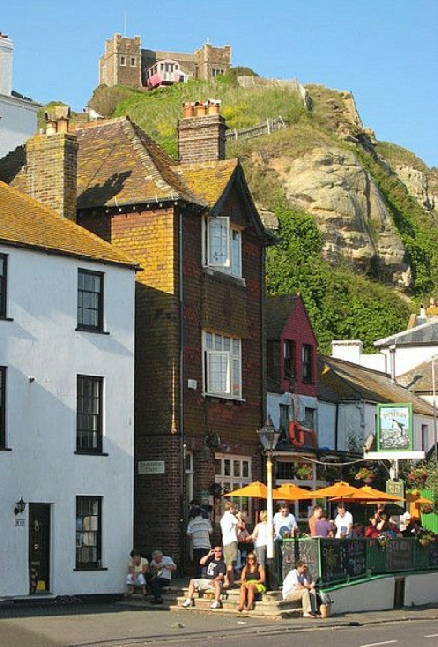 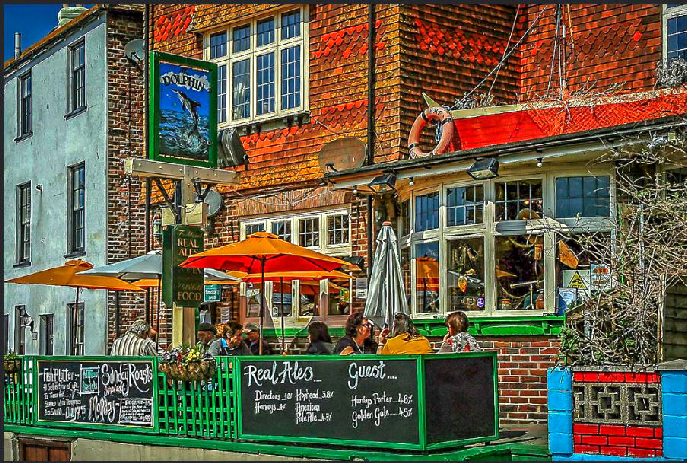 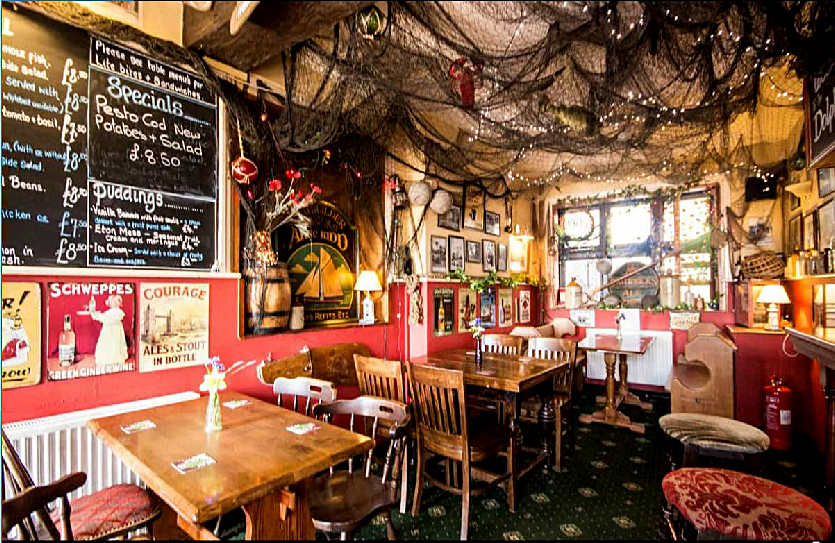 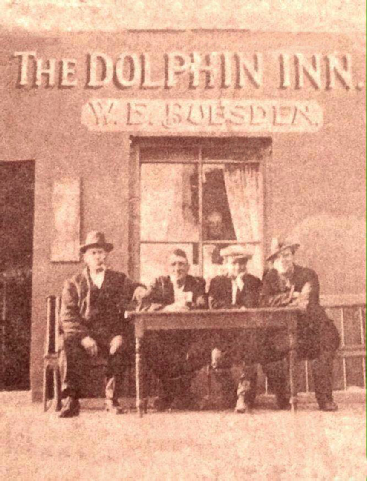 The pub dates from at least 1798 when it was recorded that William Float of Pett had an inn of that name under the East Cliff. Since then it has served the fishing community for over two centuries. The building is up to date having been rebuilt in 1851 by landlord Edward Ridley and rebuilt and extended again by Watneys in 1930.

In the hard times of the ‘great depression’ in the late 19th century, pub landlords found it difficult to make a living and many relied on second and third occupations, such as fishing.  In 1892, for example, Dolphin landlord Daniel Gibbs, who held the licence from 1888, ran a coal business in All Saints Street and took delivery of coal onto the beach. He also kept a fishing smack moored among the net huts opposite. But this was not enough. By April of that year he was bankrupt.

The Dolphin is located on the road known as Rock A Nore  which runs between the Stade, a shingle beach  to the south, and the cliffs to the north. The name ‘Stade’ means ‘landing place’ and is home to the biggest beach launched fishing fleet in Britain. The name ‘Rock A Nore’ was officially adopted in 1859 and derives from a former building then described as: “lying to the mayne rock against the north”; a description applicable to the Dolphin itself.

The Net Huts on the Stade, approximately 50 black wooden sheds standing in neat rows, are unique. They were built as weather proof stores for fishing gear made of natural materials, which rotted if left wet for any length of time. Most of the Net Shops stand on land that formed after groynes were built in 1834. The beach area was small and restricted so each shop could only occupy less than 10 square feet. Consequently, they could only grow upwards. Boats returning from trips are pulled onto the beach. Each net hut contains an engine and winch, operated by a ‘boy ashore.’ Tractors help push the boats into the sea. 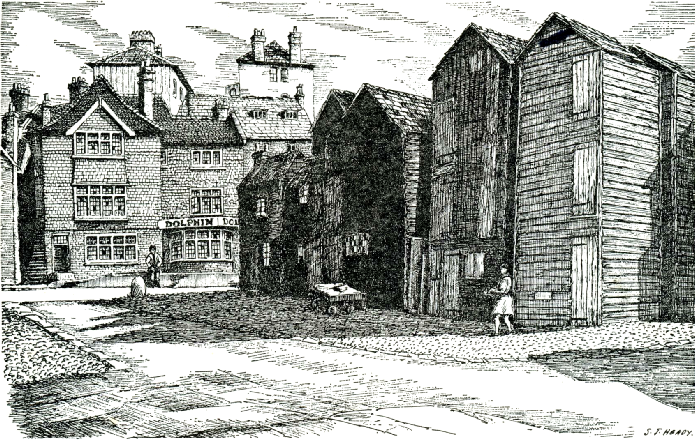 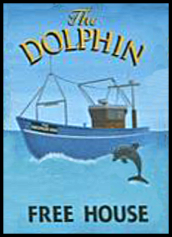 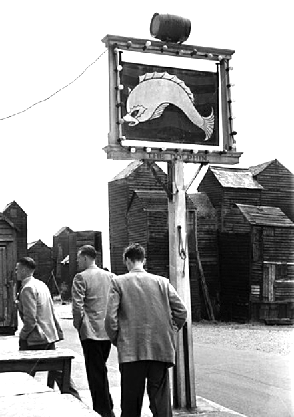