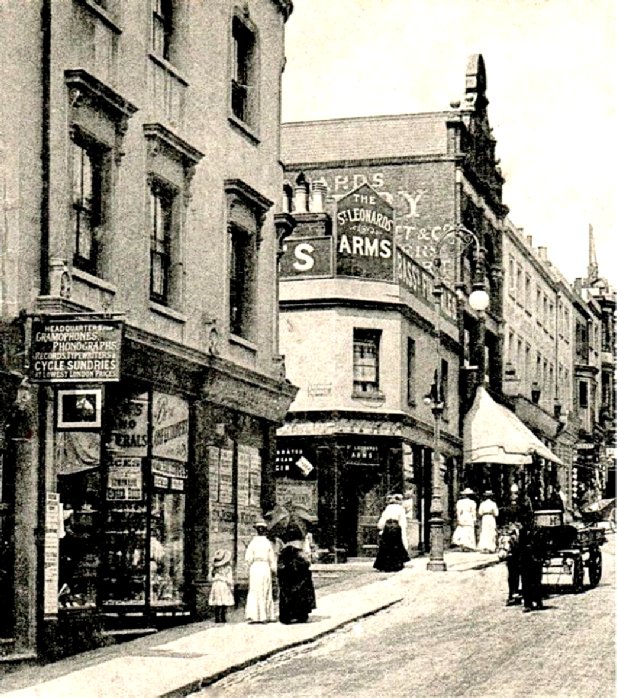 These two pubs stood two doors apart in Shepherd Street. The Foresters still stands as a private residence and the St Leonards Arms is now a hairdressers on the corner.

The building of St Leonards in the 1830s required a large workforce, many of whom were itinerant travelling tradesmen who found accommodation on America Ground, Hastings. America Ground was an area  of unowned land on the Hastings shoreline inhabited by a large community who had raised the Stars and Stripes as a symbol of their independence.

The ‘Americans’ were evicted from America Ground in 1835 and a large number of them moved into St Leonards, taking their homes with them. One ‘American’, Daniel Thomas, was landlord of an old gin house named the Black Horse, on the site of what is now Holy Trinity Church in Hastings’ town centre. The Black Horse was dismantled and re-erected in Shepherd Street, St Leonards, by James (Jemmy) Hyland. Many other buildings from  America  Ground still stand  in  the  surrounding streets.

For most of the 19th century, the Black Horse was both a beerhouse and a small, crowded lodging house where, if you weren’t careful, you might find your belongings in a nearby second-hand shop. Lodgers slept two to a bed. One evening a policeman checking on closing time found the ground floor empty but insisted on going upstairs, where he found six men drinking beer from earthenware pots in a room with three beds.

In the 1850s some customers spent all day here drinking and playing ‘Four Corners’. This was a game played by throwing a large wooden bowl or ‘cheese’ weighing 6 to 8 lbs [2.7  to 3.6 kg], at four large pins placed at the corners of a square frame, from a distance of about 10 feet [3m]. Because of the space required, it was usually played in a Four Corners shed or alley, which in the case of the Foresters must have been in a rear outbuilding. Customers at this time included the railway navvies, building the line through to Hastings.

In 1864 the Black Horse hit the headlines when there was an ‘Attempt at Murder and Arson’. Thomas Bowsteed of Gensing Road was charged with shooting William Tew with a pistol and of trying to set fire to a workshop behind the pub which Tew rented from the landlord. The case was referred to Lewes Assizes and Bowsteed was imprisoned for several years.

In the 1870s the landlord, George Earle, ‘an elderly man with a wooden leg’, was cautioned for allowing late night drinking. In his defence he said that one man found on the premises by the police was a cellarman who came in every night to tap the barrels, because ‘I only have one beer engine’. He couldn’t do it himself because he ‘couldn’t stoop and if the tap busted, beer flew all over the bar’. Another man, George Copley, a lodger, said he ‘had some beer drawn but it was so full of froth he wouldn’t pay for it’. The case was dismissed with a warning that ‘it is unusual to tap beer this time of night’. The court was attended by several of George’s customers including an artistic decorator, a grainer and a shoesmith.

Before the arrival of the railway St Leonards had its ice, coal, timber, building materials and other goods delivered by boat onto the beach opposite the end of London Road. Some of these boats often arrived late on Saturday night or early Sunday morning, when pubs were supposed to be closed. A provision in the law allowed pubs to serve ‘bona fide travellers’ including boat crews, outside of normal hours, but this did not include the men who unloaded the boats.  When the boats were in, police often checked with a knock on the door. “Who’ve you got in the kitchen, lodgers?” “No”, replied the landlord, “men working on the collier just come ashore”, and got into trouble for it.

A game of Four Corners in 1856. Note the man sitting down is smoking a ‘Churchwarden’,
a 2 feet long clay pipe, popular at the time. Drawing by James Gray 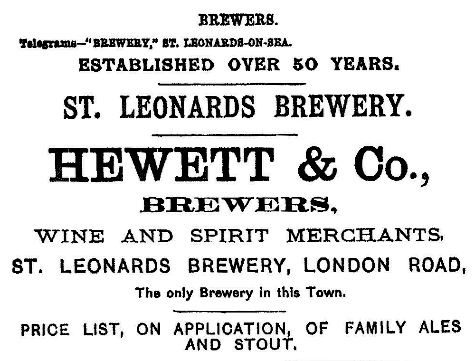 Between 1886 and 1888 the Black Horse was rebuilt and renamed the Foresters Arms. In 1905 the chief constable opposed the licence and the magistrates questioned Breeds Brewery on the need to keep it open. In the rear yard, a cottage was let at 4s 6d [22½p] a week and three workshops at 6d [2½p] a week each. These were reached by a twitten called Black Horse Passage, formerly Valentine’s Passage, which had its own entrance.

At this time the landlord worked as an upholsterer during the day. The previous landlord had been an army pensioner and local bandmaster. The pub takings averaged £11 a week and the rent was £18 a year. They sold 204 barrels of beer a year and a lot of bread, cheese and pickles. One hundred loyal customers signed a memorial in support and the pub stayed open.

A quarter of a century later in the depression, a more upmarket landlord took over. He had been a steward at the Constitutional Club in Crowborough and licensee of the Sussex Hotel in Tunbridge Wells. In 1933 he applied for a wine licence, claiming that there was an all-year-round demand for wine in Shepherd Street. This was refused and it was not until 1952 that the Foresters was granted a full licence. 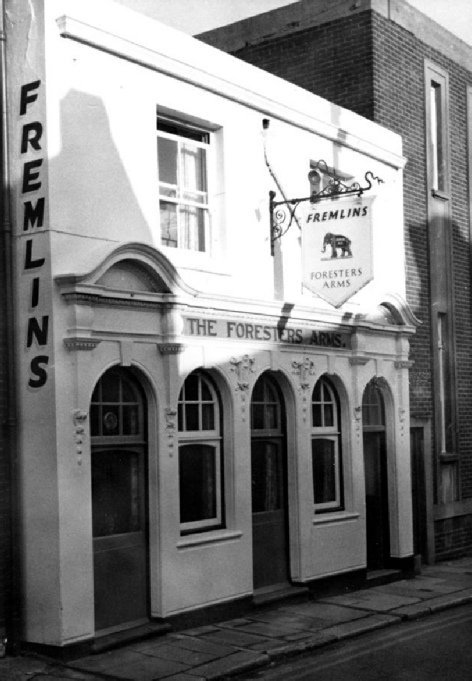 The last landlord was Eddy Churchill, who arrived in 1959. When he moved to a restaurant in Hastings in 1969, the Foresters closed its doors for the last time. It was one of three Whitbread houses in St Leonards, including the Warrior’s Gate and the British Queen. Originally, however, it was tied to St Leonard’s Brewery located next door in Shepherd Street. The Foresters later became The Photogallery.

The St Leonards Arms, stood two doors away from the Foresters Arms on the corner of Shepherd Street and London Road. It was tied to the St Leonards Brewery, as the brewery tap. The St Leonards Arms, formerly the Crown Tap, allegedly came into existence in 1827 making it the first pub in St Leonards. It applied for a full licence in 1850 which was refused, and in 1854 landlord James Nabbs was summonsed for selling spirits. A witness said he bought two glasses of porter at 1½d each, 2d worth of bread and cheese and a glass of gin for 3d ‘from under the counter’.

In 1858 the Crown Brewery was auctioned off and was described as ‘embracing all modern improvements’. It had stores and stabling in Shepherd Street and a further six adjoining dwellings in London Road. The pub was granted a full licence in 1859 when it became the St Leonards Arms. The brewery was renamed St Leonards Brewery.

In the 1890s it advertised ‘good accommodation for cyclists’ and in 1907 both pubs and the brewery were purchased by Breeds Brewery of Hastings.

In 1920 two men, one a demobbed Canadian soldier, stole two vases from a boarding house in Warrior Square. They attempted to sell the vases to the barman John Moule, who lived in Market Passage. He reported the incident and they were fined 40s [£2]. “This public house is not a pawn shop for stolen property”, said the magistrate. It closed in 1921. 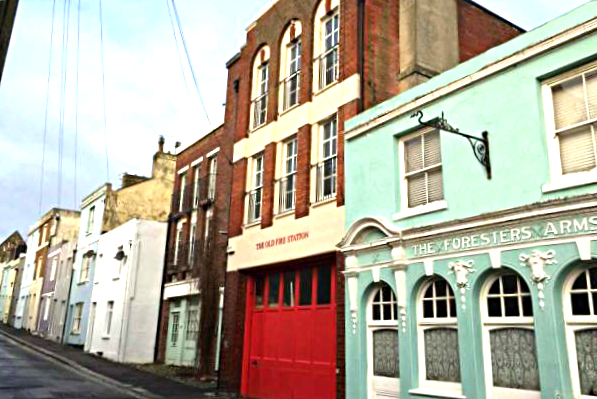 The Old Fire Station next door 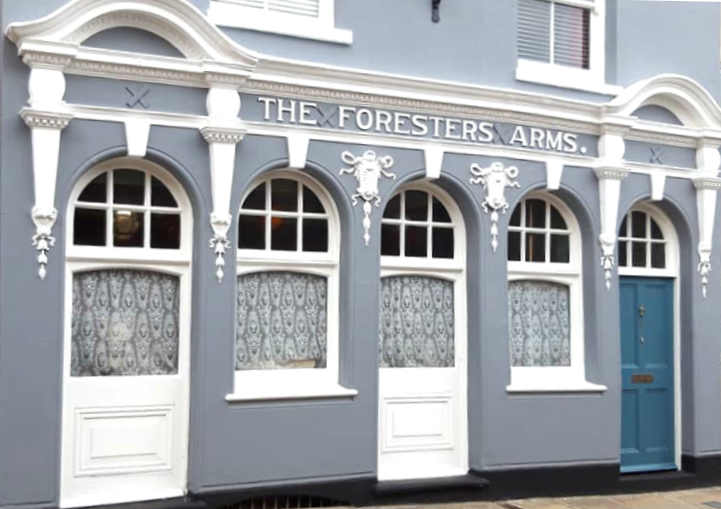 As a private house